History of the Center for Supervisory Education and Training

Legal foundation and authorities  of The conduction of  Education and Training
The Center for Supervisory Education and Training was established together with the establishment of BPKP based on a Presidential decree number 31 /1983 regarding the Financial and Development Supervisory Agency (BPKP).   The CSET has duty to execute, mentor and coordinate all the education and training activities in regards to auditing  based on the rules and regulations therefore instated and the policies instated by the Head of the body.
Based on Decree 19/ 1966 from the Minister of PAN in regard of the Functional position of Auditing  and  Credit rating, BPKP/ CSET is considered the mentoring body for functional Auditing positions in BPKP/CSET  environment and other government bodies except the BPK. ( Chapter 1, art 1)
Proceeding on this matter, the Head of the BPKP issued decree No.Kep-06.04.00-847/K/1998 of November 11, 1998 regarding the framework of Auditor Education and Training. In Chapter 1, number 4 it is stated that the working area of education and training of government auditors is  in the environment of : BPKP, ITJENDEP, ITWILPROV,ITWILKAB, ITWILKOT and other supervising  bodies to the LPND.
Purnawarman 99, Pramuka 33, dan Beringin II.
The  Center for Supervisory Education and Training  (CSET) conducted its first activity in the year 1983 at Jl. Purnawarman, Kebayoran Baru, South Jakarta. At this place, The  Center for Supervisory Education and Training, still joined office with the Finance Ministry which in fact in  the  was the “Nest” of the CSET.
In the year 1993 CSET finally owned their  own building at Jl.Pramuka 33, Rawamangun Jakarta Timur.
Finally, Pandansari village which is situated in the Ciawi district, Bogor area was chosen as the ideal place to prepare human resources in the BPKP environment and other government institutions to become professional and highly integer government  assets.
The construction of the building and the complete infrastructure was done from 2002 until 2003. In July 2003, finally CSET  could start to inhabit the new building. The official inauguration of the building took place at August 25, 2004  and was done by  Feisal Tamin (Menpan).
From the beginning of the establishment of the CSET BPKP until present date, already 9 officials have been entrusted to head the CSET BPKP.
Hereunder are the officials who have headed a the CSET BPKP.:
K A T E G O R I
Berita
Artikel
Gallery
Katalog Diklat
Download
Pengumuman
Majalah 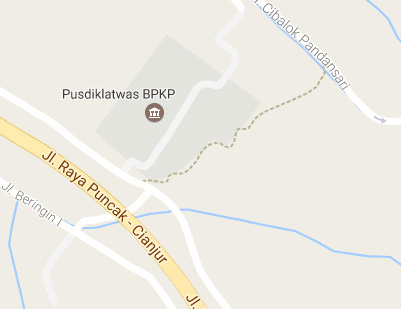